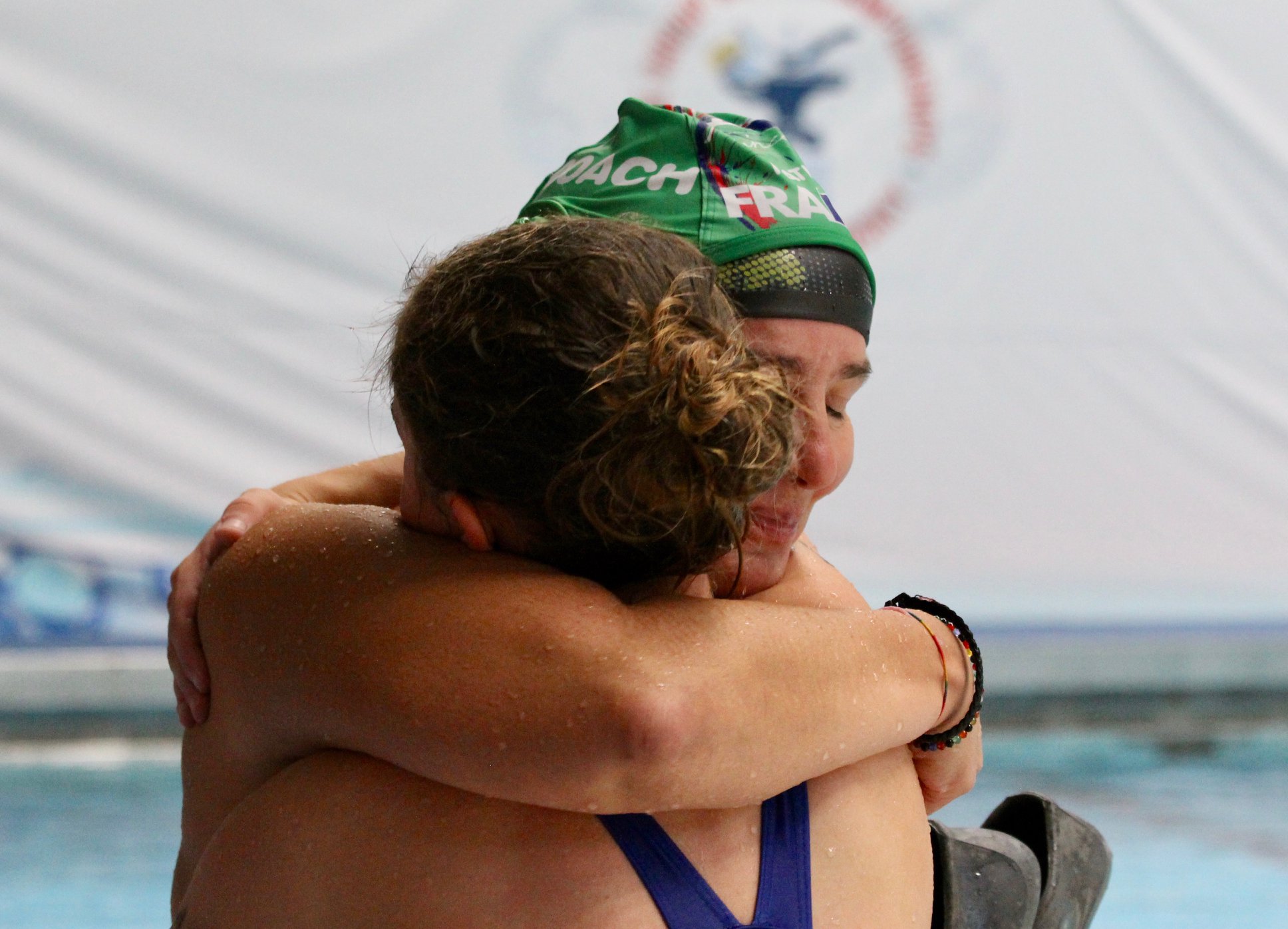 As in all fairy tales, there is a love story. A romance between a sport and its practitioner. For 30 years, Nathalie has been tirelessly diving in the swimming pools of France and the world. Here is the story of one of the great figures of French underwater hockey: Nathalie Mathieu.

Sixteen years old and she was already in it. It was as a teenager that this former swimmer discovered the sport that has shaped her life for the past thirty years. A love story that allowed him to meet the father of his three boys, all players or former underwater hockey players. Unfortunately, each romance goes through difficult times. First member at Pontoise, the club which she was champion from 1992 to 2008, Nathalie finally joined her husband in the rival club of Chesnay after a family issue. If managing this inter-club rivalry was difficult at first, she ultimately flourished with her new team. “I found a second family there where I feel very good.” She has played hundreds of games with her second club, but one of them particularly marked her. During the 2004 French championships in Rennes and a match against Fontenay, a power outage plunged the players into complete darkness. “It lasted at least 10 minutes, it was really long.” Regularly on the national podiums with her club, Nathalie never managed to acquire the supreme title with second club. “This is one of my two big goals, especially since we didn’t go far last year” (2019). His other goal? Keep the title of Masters world champion with your friends from the French team.

“It took me several months to bounce back”

Nathalie, who joined the France Elite team in 1991, had never managed to obtain the world grail despite beautiful adventures and a bronze medal at the championships in 1996 and 2006. A first for French women’s underwater hockey at the time. It was at the 2008 World Championships in Durban that she experienced her greatest regret. While the French team finished tied at the first place in the Round Robin with superb quality of play, their competition was stopped suddenly in quarterfinals. A real trauma for Nathalie for whom this match remains, for now, the biggest black spot of her career. “It took me several months to bounce back.” Fortunately, she was able to compensate for this disappointment with the most beautiful joy soon after with the birth of her third child. Finally, 10 years later, after 30 years of being away from home for at least three evenings a week, playing hockey rather than quietly staying at home with her family, she finally got the ultimate career reward. With the Masters, Nathalie won her first world title in Canada. The redemption was complete, “Quebec was the apotheosis! We didn’t falter from the start to the end of the competition. ” After having triumphed on the world stage as a player, there is still to be overcome as a coach.

“I am quite a mother hen but I remain very demanding”

Nathalie has been coaching the youth team of Chesnay for around ten years and has put her experience at the service of the national women’s U19 selection with Laurent Giacomello since 2019. “I am quite a mother-hen with my players, but I remain very demanding. ” Demanding even with her own children because, if her eldest son was old enough to participate in the France selections with the boys, Nathalie considered it preferable not to push him down this path.

At the Sheffield World Championships, Nathalie obtained a beautiful bronze medal. She admits, however, that she doubted a lot at the start of the competition, especially after their first loss against Colombia, 8-2. “I told myself that the competition was going to be long”. The French found the Colombians in the semifinals where they lost in a hard-fought match. For Nathalie, it was a goal denied by the referees to the Bleues that flipped the game upside down. A situation that Nathalie admits she could not manage. “It was a fault on our part for Laurent and me. We didn’t realize what it could do.” Despite the bronze medal acquired against the English, the coach can not help but nurture regrets. “Even if it remains a very good performance, I tell myself that we still missed the final.” With her high level experience, whether as a player or as a coach, Nathalie is a prime witness to evoke the evolutions that underwater hockey has known since its beginnings.

“It was a messy sport”

Underwater  hockey has evolved well for three decades. The sticks passed from wood to resin, the gloves are refined, the fins are made of fiber and carbon in addition to plastic. All these technological innovations, accompanied by an opening up to the world thanks to social networks, allowed the game to be more airy, less messy. “When I started, it was a lot of straight drives, there were few technical gestures. It was a messy sport. ” For Nathalie, this evolution is also explained by the inspiration drawn from the countries of the southern hemisphere such as Australia and New Zealand where the game was much more fluid. The rise of social networks has also popularized the practice of underwater hockey, especially thanks to the young generation who live their daily lives on their Facebook or Instagram page. “My loved ones ask more questions and are more interested in sport because they see more and more.”

Nathalie is passionate about her sport, the one with which she has lived for over 30 years now. Insatiable and constantly learning, the pools are not ready to see her stop swimming and coaching.