Israel, from a pseudo invention to multiple innovations 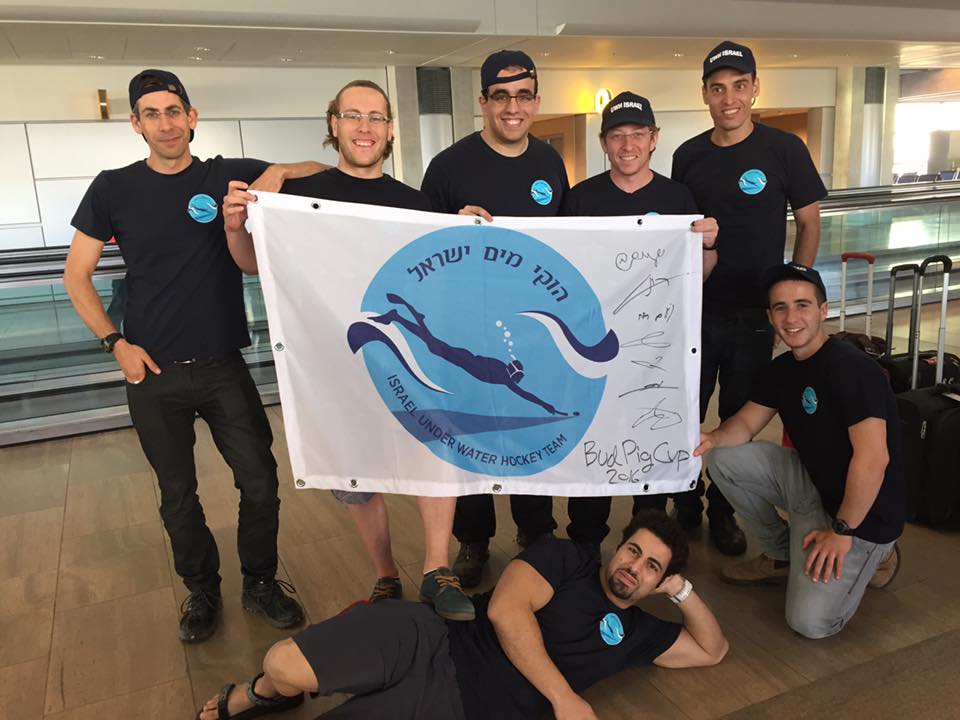 In some parts of the world, a few die-hard hockey players share their passion, even going so far as to create clubs. From Africa to America, through Europe and Asia, focus on these little-known countries of underwater hockey. Tenth episode with Israel !

In the south-east of the Mediterranean, Israel is quite isolated from the big underwater hockey nations, those of the north as well as those of the south. So isolated that in 1994, a man and his friends thought they had created a sport. An activity that is played in a pool with a stick and a puck. That person is Tal Ephrat’s older brother. “A few years later, thanks to the expansion of the internet, they discovered that it was a real sport” recalls the man who is now in charge of hockey in the country. It was in 2008, only a year after he took part in his first training sessions, that Tal started to learn what the sport was all about. He crossed the Mediterranean to Hungary where he was able to test his first hockey glove.

For four years, he was the only player in the country with the right equipment to play the sport. “I was the only one who could really fight in the pool with the puck.”
That ended on another of his trips across the seas, this time to Belgium, where he discovered the complete equipment of an underwater hockey player. Gone were the days of training with goggles and gardening gloves, it’s cap, mask and snorkel time. “After that we ordered the new gear and started to play better“.

With the arrival of this new equipment, hockey has developed in Israel. Tal established the first club in 2015 in Kiryat Tivon, located in the north of the country in the Haifa district. While the sport was only practiced in the summer in the old swimming pool in Givat Ela, now training sessions are held once a week. In 2016, a second session was held a few kilometres further on, in Nahalal. Although both sessions were attended by the same players, it awakened their competitive spirit so much so that a few months later, the Israeli team played in its first tournament, the Bud Pig Cup, in the Czech Republic. “We finished seventh out of 15 but we played with Belgian friends who are part of the Elite national team. Without them we would have finished around tenth place” Tal admitted.

While these fears were confirmed the following year with an average Budapest tournament for Israel, 2017 also marked the start of the country’s national championship, which is played in 3-on-3. “The players are grouped into three groups: top, medium, low. The teams are formed with one player from each level.”
More training and more competition can only make you better. Back at the 2019 Bud Pig Cup, Israel came sixth with only players from the country ! A linear progression partly due to Thomas de Trébons who organised a training camp in the country in 2018 but also thanks to an ingenious points system conceived by Tal the same year.

As with many clubs starting out, recruiting players can be complicated. To increase Israel’s membership, Tal started an internal competition where each player must have the most points in the year to try and win the top prize.
Almost every activity in the club is a way to climb the rankings ! “Every week we have a match. If one team wins 8-6, the first team gets 8 points and the other gets 6 points.” Even a meme competition on the club’s Whatsapp group rewards the winner with five points !
The most points are obviously earned by winning the national championship, but also if a player brings in a new player and participates in a certain number of training sessions (30 points). “This ranking system is based on the player’s efforts to develop himself and the sport.”

The prize for the winner ? A free ticket to the next competition Israel enters. Tal has invested in this system but it has paid off. “The players came to training more often, so they paid more. They brought players and so more money came in.” Since the introduction of this method, the club has started to grow from ten to around thirty members. Now that the players are regulars, there is still one step that Tal and his teammates have not yet taken : participating in an official competition between national teams.

Former professional swimmers in the team !

Participating in a world championship is a dream come true. While Tal is aware that Israel does not yet have the level to participate, there are players who could form the basis of the country’s potential future team. “At the moment we only have five good players of an elite level equivalent to Portugal, Japan and Argentina. We also have two very good young players who could play in the Age Group […] they will be better than me in five years’ time.

One of the strengths of the Israeli team could be speed. As a swimming coach, Tal tries to recruit retired international swimmers. Among them is Yaron Shagalov, tenth in the European breaststroke championships in 2014. For swimming fans, he competed in the same race as Adam Peaty when he broke his first world record !

Other swimmers who have competed in international or European championships, this time at youth level, are or have been part of the club such as Oren Malka and Keshet Yelin for the women. “She started the sport only a few months ago and she is incredible. She’s very fast and it’s very hard to contain her because she’s very powerful.”

For the December 2021 holiday, Tokyo Olympian Ron Polonsky is back in his home country. It’s an opportunity for Tal to use his connections to get him to try out underwater hockey and attract potential recruits. “He’s friends with the swimmers we recruited. They asked him to come and I’m going to try and get him on camera so the swimming federation will share our position.”

The world championships are still a long way off for Israel, but with Tal’s connections and an original points system motivating his players, it will be interesting to watch the country’s development in the years to come.