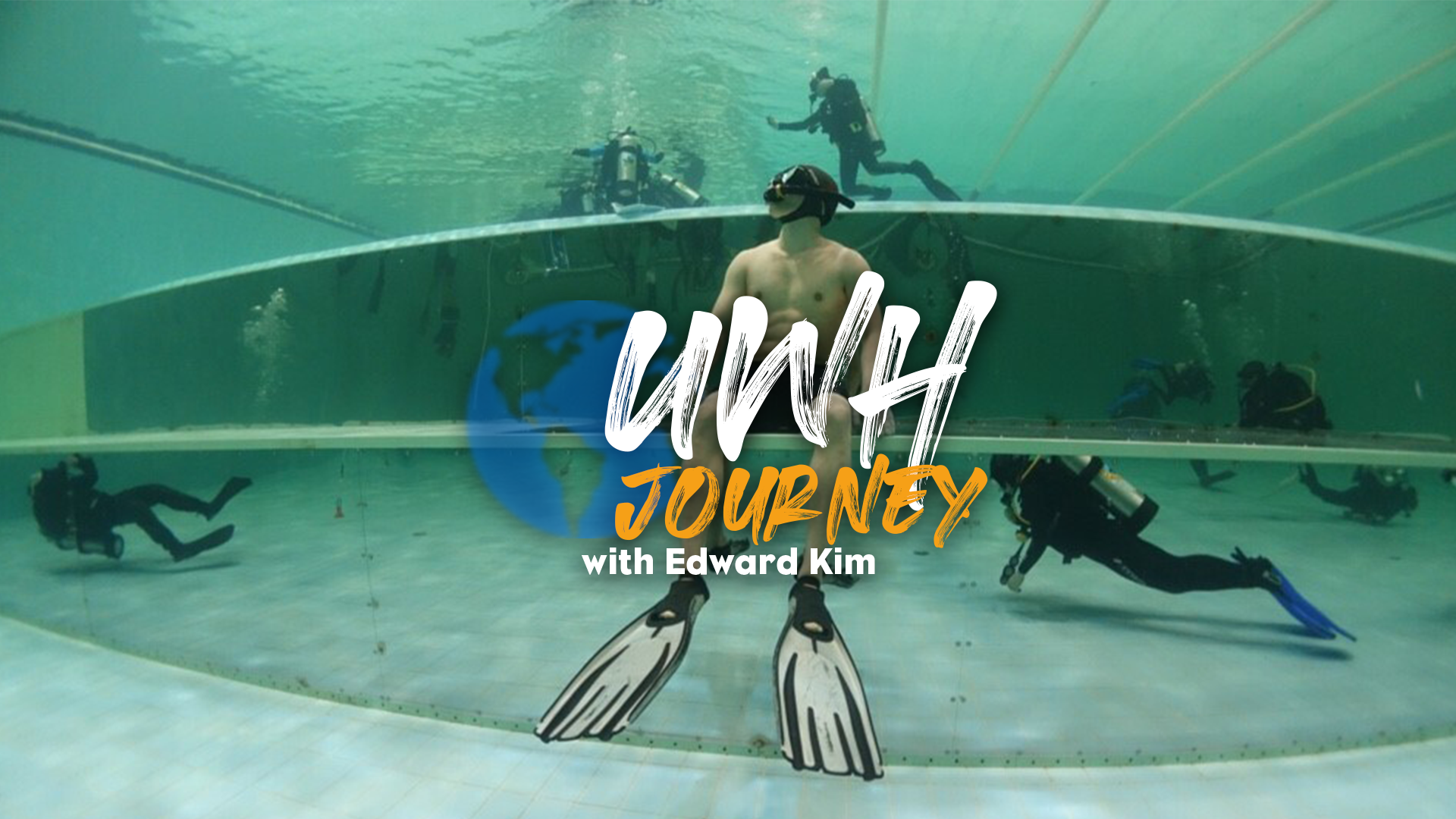 I remember my first contact with UWH was in South Africa, in 1997, at Pretoria University Pool. A gentleman with a diving mask had a short stick with a puck, alone, spending all his time at the pool bottom. Being a shy, not so much talkative guy – I did not dare to ask or make conversation with him, then. Years later, 2015 while I was working in Shanghai, I found a local UWH club and joined them. The first trial was a challenge, though I had quite a lot of confidence in swimming.

Right after the first session, I felt a breath of new life and a strong heartbeat, and naturally fell in love with the sport immediately. I was truly excited like a little kid, it didn’t take much longer to realize that UWH became a big part of my conversation and life !

After months of UWH sessions in China, I got co-incidentally connected with Korean freedivers and swimmers to promote UWH in Korea. Providing documents with translations, sending equipment and sharing videos – but clubs weren’t just made as easily as I thought. As most of the local Korean pools were dedicated for swimming and swimming lessons only. Most of the pools were too shallow (under 1.7m) for some safety measures of their own. In 2019, it was decided that I was going to go back to Korea, so the mission of starting UWH became my personal objective ! During holidays, I dedicated my time to visit pools within nearby cities. It took about 6 months finding a pool where they agreed to let some space for UWH.

So, a pool for UWH was found and my prayer was answered. Now, gathering members for the club was another thing. Local scuba divers or freedivers weren’t very excited about UWH.- Maybe most of them wanted to have relaxing time underwater instead of having exciting sports.

Becoming nervous about not being able to play UWH, I have reached many swimming and diving clubs with UWH suggestions just wanted to let them try out. Being unsuccessful, I found myself quickly getting used to rejections and not being welcome to those clubs where they wanted to keep the programs under control, more profitable manner.

Luckily, Alex P – a triathlon athlete came in contact through my old rock climbing friend and the club started, with just 2 of the main founding members. UWH being strange sport and unknown in the area, it was hard to convince friends and nearby people just to try out. So we’ve been putting up pictures and articles on SNS, website and youtube to promote the sport and hoping to gather more members.

With help of the club’s pure passion and SNS technology, the club grew to 7~9 regular participants in a few months. (and More-sport has kindly visited the club during the cold winter of 2019!). Though most of the members weren’t very skillful, they seem to enjoy UWH. We all believed that the club and UWH would grow as time passed.

Until the beginning of 2020, other than usual ‘weekend UWH sessions’, making video clips, writing short SNS stories were main activities of the club. Everything seemed to be working out slowly but surely – designated pool also started to recognize UWH and agreed to help us more, National Federation (Korea Underwater Association) agreed that they can support participating international competitions as long as the club prepares its own funds.

Lovely time passed so quickly, being happy to have daily improvement and high hopes for UWH developments in my nation.Then all of sudden, COVID struck. Pool was shut down for more than 12 months and so did the club – time of agony and desperation, not being able to play UWH felt almost like eternity.

Only recently, local authorities have finally lifted pool closure from 2021 Mar 20 with new disinfection procedures and guidelines for public sport centers. Now the club also re-opened and started the new chapter with old and new members, including new expat players. Now with new COVID limitations, it is even harder to grow the club and gather new members but the club will continue as long as there is a pool where we can play and an opportunity to grow UWH in Korea.

I hope someday there will be enough clubs in Korea to have league matches including inter-region, inter-school competition.

I hope people can soon realize that UWH is one of the most fun and the best way to keep fit and enjoy a healthy life ! and Cheers to all UWH friends in the globe !‘

Damien McNulty : ‘The role of the referee is not to show that he knows all the rules’

QUIZ : Name the players of the 2018 Master Women WC final

Steven Kars : one of the pioneers of underwater hockey on social networks

Steven Kars : one of the pioneers of underwater hockey on social networks

Damien McNulty : ‘The role of the referee is not to show that he knows all the rules’

QUIZ : Name the players of the 2018 Master Women WC final

Steven Kars : one of the pioneers of underwater hockey on social networks
Chargement des commentaires…
Commentaire
×